We are in Navajo Nation, and are about to explore one of the most beautiful canyons in the Southwest. We struggle up our horses.

Most of the gang have never been on a horse.
We set out at 9 am for an 8 hour ride.

We get off to a bumpy start with a bit of trotting. The discomfort is definitely offset by the phenomenal scenery. We ride by a number of cliff pueblos built by the Anasazi.

At one point Jonathan and his horse take off galloping and it seems we have a bit of a show off. Little did we know his horse got spooked, with Jonathan hanging on like a pro.

A few hours later, when we reach the furthest point, the horses sense we will heading back to camp soon. Martha’s horse has had enough  of the dominguero on her back and gallops off. We are impressed at the chivalry of Brendan as he goes after her at top speed hollering something. We assumed he meant for Martha’s horse to stop as he storms off. We found out later, he was holding on for dear life and was not the least bit worried about Martha.

Toward the end of the day, we are alone in the canyon. We make our way toward Junction Ruins, and set up our tents. We are all walking a bit funny. 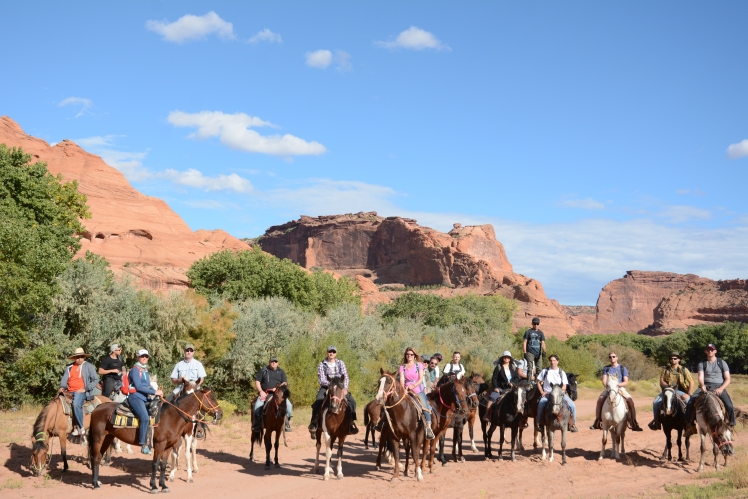 In spite of the soreness we all feel, we scramble up the cliffs above us for an incredible view highlighted by a double rainbow. It has been a rough day for this gang of motley cowboys.

(3) Your Pace or Mine
Chris Morillas & Josh Pinder